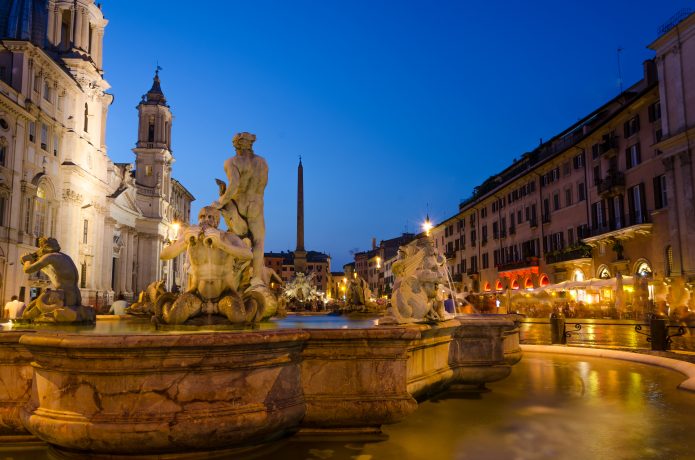 Walk through Via de’ Burro, past the majestic columns of the temple, and up to Piazza Sant’Ignazio and its eponymous church.

Then, take Via del Seminario up to Piazza della Rotonda, a crowded square dominated by the amazing Pantheon, one of the most iconic buildings of Western architecture.

You will finally arrive in the beautiful Piazza Navona, an exhibition of Rome’s historic center, featuring sculpted fountains, gorgeous baroque palaces and outdoor cafes. The square is always crowded with tourists, street performers and vendors. Piazza Navona has been the Rome’s main market place for 300 years. The works of two great Baroque artists can be compared here: Bernini’s Fontana Dei Quattro Fiumi and the Church of Sant’Agnes in Agone of Borromini.
After leaving the square, follow Via del Governo Vecchio, a street filled with boutiques, second-hand shops and trattorias. At the end of it turn left unto Via dei Filippini. Then continue up to Corso Vittorio Emanuele, a road that splits the historic center in two parts.

Cross it, follow Via dei Cartari up to Via del Pellegrino and you will reach Campo dei Fiori. This loud and colorful square is one of the hearts of Roman life. In the daytime it hosts one of the most famous markets of the city. In the evening it turns into an outdoor bar.

You may also be interested
Visiting Rome in 3 days – Our recommended itinerary
Visiting Rome in 2 days with children – Where to go and what to do
Trips outside of Rome – What to see and where to go
The Colosseo (Colosseum) – What is it like?